Four seats give extra flexibility (especially for the short-legged) and the protective panel around the cab means it is cosy and fairly rainproof when the hood is down. A 987 cc Turbo charged engine ensures one can pass inquisitive drivers at a respectable speed. The polo mint wheels, fleur de lit switches, round retro dials and white leather upholstery highlight the attention to detail in the production of this quirky, practical and reliable car.

In the UK the Figaro is now a cult car and much desired. The price is increasing and a good one can cost as much as 15,000.Celebrities, such as Vanessa Feltz and Andrew Marr own one and Eric Clapton had one in the past.

Ernie liked the car so much he got himself one, thinking it would be nice for Spain. He spent hours cleaning the nicotine-stained upholstery even the air-con unit was surrounded by staining the previous owner must have been receiving a double nicotine-fix as he drove along! Ernie’s fingers suffered with the scrubbing and the chemicals, not to mention the bath at home!

In France and Spain the car drove very well and there were no problems except for a small glitch in Chinchon when 2 plugs were needed and a puncture repaired. The garage mechanics had never seen a Figaro before but were very helpful and able to sort things out quickly.

We look forward to many hours of motoring in our new little car. If you see us honk your horn! 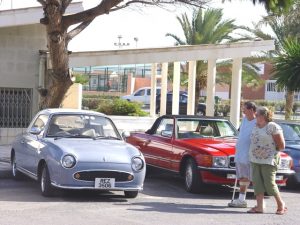 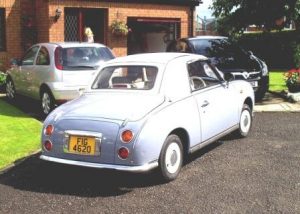